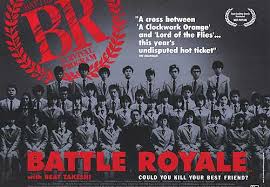 Movie Screening at LOKAL’s NEW CoLAB Theatre!
🎬 Screening: Battle Royale (2000) ‧
LOKAL CoLAB 44 Vasil Petriashvili, Tbilisi
2000 ‧ Action/Thriller ‧ 2h 2m
Japanese action-thriller film directed by Kinji Fukasaku, with a screenplay written by Kenta Fukasaku, based on the 1999 novel by Koushun Takami. Starring Tatsuya Fujiwara, Aki Maeda, Tarō Yamamoto, and Takeshi Kitano.
The film earned critical acclaim and, drew a large global cult following. It is often regarded as one of Fukasaku’s best films, and one of the best films of the 2000s.
Summary
At the dawn of the new millennium, Japan is in a state of near-collapse. Unemployment is at an all-time high, and violence among the nation’s youth is out of control. With schoolchildren boycotting their classes and physically abusing their teachers, a beleaguered and near-defeated government decides to introduce a radical new measure; Battle Royale Act. Overseen by their former teacher, Kitano’s randomly chosen school class is taken to a deserted island and forced to fight each other to the death, with only one pupil allowed to survive.
https://www.facebook.com/events/1277844496098402/