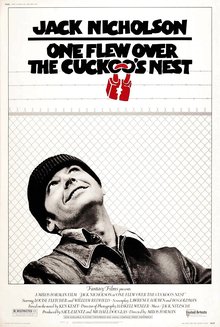 1975 ‧ Drama/Comedy drama ‧ 2h 13m
American psychological comedy drama film directed by Miloš Forman, based on the 1962 novel of the same name by Ken Kesey.
The film stars Jack Nicholson who plays a new patient at a mental institution alongside Louise Fletcher who plays an austere nurse. It also features a supporting cast of Will Sampson, Danny DeVito, Sydney Lassick, William Redfield, as well as Christopher Lloyd and Brad Dourif in their film debuts.
In order to escape the prison labour, McMurphy, a prisoner, fakes insanity and is shifted to the special ward for the mentally unstable. In this ward, he must rise up against a cruel nurse, Ratched.
Screening to be held at LOKAL’s NEW CoLAB Theatre (44 Vasil Petriashvili) 10GEL entry
https://www.facebook.com/events/1471513216706756/