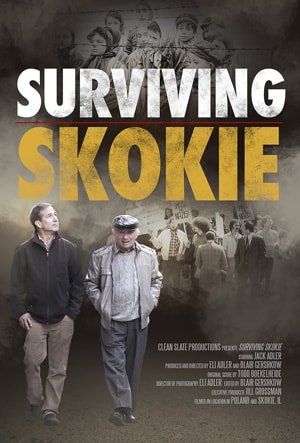 2015 ‧ Documentary ‧ 1h 6m
The United Nations General Assembly designated January 27—the anniversary of the liberation of Auschwitz-Birkenau—as International Holocaust Remembrance Day.
In recognition of this, join us for a an intensely personal documentary, exploring the effects of a late 1970s threatened neo-Nazi march in Skokie, IL on its large Holocaust survivor population.
Thousands of survivors comprised 10 percent of this Chicago suburb, including Jack, the father of co-producer, Eli Adler. The relationship between father and son deepens as they return to Poland, where Eli learns more about the extended family that perished during the Shoah. Together they retrace the painful and debilitating journey through two ghettos and two concentration camps.
Included are poignant commentaries and archival footage of the historical events spanning 70 years and two continents.
Screening to be held at LOKAL’s NEW CoLAB Theatre (44 Vasil Petriashvili) 10GEL entry
https://www.facebook.com/events/5882682705133194/